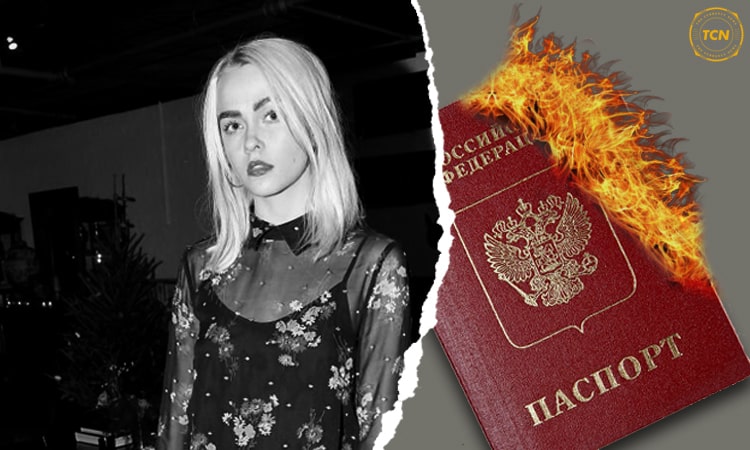 Olive Allen the NFT artist said in public by burning her Russian passport and protesting against the current government, she was trying to make it dangerous to deport.

Olive Allen is a Russian citizen of New York-based NFT artist who lived more than 10 years in the United States. She burned her Russian passport in the hope of increasing funds and attention for the war of the armed forces in Ukraine.

Olive Allen said Russia is always her homeland and originality, or she called herself “the child of new Russia”. Due to the recent activities in Ukraine, she had decided to cut off her links with Russia. Allen said she only had one copy of her Russian passport that she burned in front of the Russian Federation Consulate General in New York City. She planned to sell the video auction as (NFT) nonfungible token. Then the auction payoffs go to humanitarian efforts in Ukraine.

Olive Allen said, Putin’s Russia is not my homeland because our country has tremendous power, but the government has been beating the people forever.

After the December 2017 Bitcoin bull run, Olive Allen has been created in the NFT space since 2018. Allen said the decision to burn her passport was taken just because she was never able to see herself ever back in the country under its current leadership.

The current situation of the country is just heartbreaking. And I don’t believe in Putin’s Russia, but  I love my homeland.

On Friday, the auction of her burning Russian passport reached live on the marketplace. She mentioned that she would support the funds from the sale for the children and the societies that help them from problems like violence, early marriage, child abuse, and education.

According to Allen, her intentions were to serve humanity instead of the military. She wants to send funds to save children and humanitarian actions. The NFT artist said in public by burning her Russian passport and protesting against the current government, she was trying to make it dangerous to deport.

I’m a Russian artist and I burned my passport because I don’t believe in Putin’s Russia & and I don’t support the war in Ukraine. I’m auctioning off my burnt passport NFT to raise Funds for the people of Ukraine impacted by the war.

According to Russian federal law in 2002,  a person who lives abroad have the freedom to be cut off from Russian nationality except in case a person does not owe another country nationality. And overall burning one’s passport doesn’t affect the dispute of nationality to any country.

Allen will have to follow the legal laws, complete the paperwork and present her passport at the Russian consulate. The fear was enough of being arrested on her return to any Russian territory.